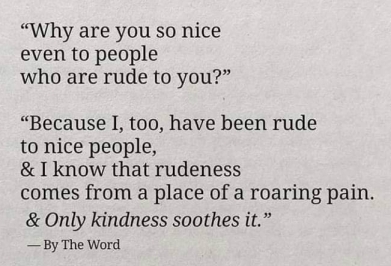 I saw this online Saturday and it immediately spoke to me. Without thinking much about it, I shared it, figuring somewhere out in the wild it might speak to someone else too. Then today the hubby and I decided to try out a different church in our new town, and for the first time in a long time, we went to Catholic mass.

We were a little late arriving so I fumbled around a bit to find the scriptures in the Missal. One of the things I always found interesting about Catholic Mass is that unless you’ve studied what the scriptures will be ahead of time, you really aren’t sure where the message will lead. In the Baptist Church we’d attended at our old home there was always a yearly theme. Today, as soon as the message became clear I realized it was divinely paired with the little quote I’d shared online the night before.

In the first book of Samuel, David and Saul have become enemies, the latter pursuing David to keep him from becoming the new king. When David finds Saul asleep, with his spear stuck in the ground at his head, Abishai whispers to him that now is the time for them to finish off their enemy. But instead, David refuses to slay the anointed one, saying instead that the Lord must bring his own will to pass.

The book of Luke teaches us that age-old lesson of loving our enemies. We should pray for those who hurt us. We should give without expectation of repayment. We should love those who are difficult to love. Because as children of God we’re told that the way we treat others is how God will treat us too.

Today the priest told us a story he’d once heard about a blind rock climber. When someone asked him how he handled the danger of what he was doing when he couldn’t see, he responded simply, “I don’t think too much. I just lean into the rock.”

Wow, this seems so profound! Don’t think. Don’t analyze something to death. If you do you’ll just stay stuck, never moving up. If instead, you lean into the rock then you can find the means to keep climbing.

It’s easy to get stuck in hardships. To mope and to brood in the malaise of pain and suffering. Or to let our anger at people who have hurt us get the best of us.

Recently I’ve found that social media is getting to me. So many people spouting anger and hate and vitriol. And especially with the keyed up tensions between opposing sides about issues like abortion. I’ve found it hard to keep silent when social media friends share things that seem so clearly wrong or horrific to me. And from time to time I see that spear sticking in the ground and know that I could take a stab at the cruelty of people I meet online.

I usually zip my cyber mouth and move on, inside seething with equal measures anger to what I witness in the wild and feelings that I’m coward for remaining silent.

But what if I don’t think, but lean into the rock instead? What if I rest in the love of Jesus Christ and don’t analyze things to death? Because the Lord’s victory of the evils of the world is assured to me, to us all. I can rest in the hope of Him who promises salvation. I can wait for those times he gives me a foothold instead of a spear.  And what if from that foothold I can send out love into the world?

By leaning into the rock I can become closer to the Lord. And when I become closer to Him, when I touch Him, I can carry part of Him with me. That doesn’t mean that I won’t or shouldn’t fight to make this world a better place. It just means that the first step to that is to show the world Him.  And I can do that best not by spouting off or stabbing at the ills I see, but by striving to always do and be better and to show Him through acts of love…

Because only kindness can soothe the pain…

When Olivia Hardin started having movie-like dreams in her teens, she had no choice but to begin putting them to paper. Before long, the writing bug had bitten her, and she knew she wanted to be a published author. Several rejections plus a little bit of life later, she was temporarily “cured” of the urge to write. That is, until she met a group of talented and fabulous writers who gave her the direction and encouragement she needed to get lost in the words again. Olivia has attended three different universities over the years and toyed with majors in Computer Technology, English, History and Geology. Then one day she heard the term “road scholar,”' and she knew that was what she wanted to be. Now she “studies” anything and everything just for the joy of learning. She's also an insatiable crafter who only completes about 1 out of 5 projects, a jogger who hates to run, and she’s sometimes accused of being artistic. A native Texas girl, Olivia lives in the beautiful Lone Star state with her husband, Danny, their corgi Bonnie Sue, and their new rescue Heidi Ho.

This site uses Akismet to reduce spam. Learn how your comment data is processed.